With its first line of sneakers, Lululemon wants to bring its ‘Science of Feel’ to your feet 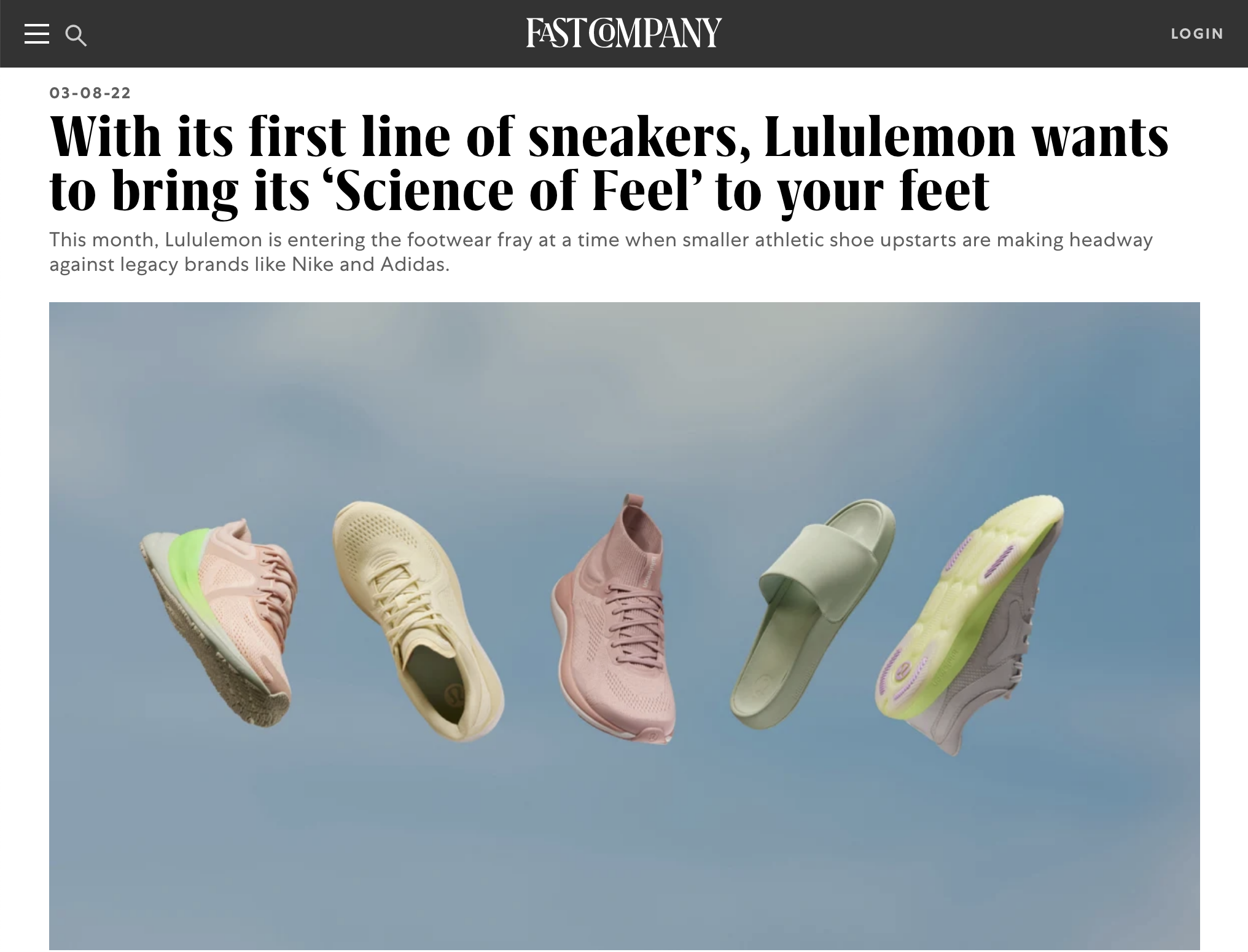 The word most used to describe Lululemon’s best-in-class workout leggings is probably “buttery.” This isn’t an accident. Lululemon explicitly researches how things feel on the body and thus how people psychologically feel while wearing them. The company has incorporated the philosophy into a tangible tagline they call the “Science of Feel.”

Now, Lululemon is launching its first line of footwear, which it announced in April 2019. The company is leaning into the concept of “feel” for the shoes, incorporating it into its marketing and even the packaging. (The shoes arrive in tissue paper emblazoned with the word “feel” in varying fonts.) In Lululemon’s view, how the products feel is not at all secondary to how they function—it’s integral to functionality.

“We saw a real opportunity to take our Science of Feel philosophy around feeling your best to perform your best into the footwear category to support the [customer] head to toe,” says Sun Choe, Lululemon’s chief product officer.

The company also knew that it had customer demand. From 2017 to 2018, Lululemon collaborated with fashionable sneaker brand APL, whose designs often have a woven and quilted look in directional colors. It helped Lululemon figure out how to sell shoes in its stores and what its customers were drawn to. Now, Lululemon’s own homegrown line features shoes “built for women first, not women also,” per Choe.

The first style, a running shoe called Blissfeel, launches March 22. It will retail for $148 and comes in 10 initial colorways, including neutrals like black, white, and gray, all the way to light pink, a peach shot through with neon green, and electric red. More styles will launch in the coming months, including a hybrid shoe for running-training, a training-specific shoe, and a post-activity slide. A men’s line is forthcoming, but Lululemon is focusing on women first, which makes sense, since this has recently been about 70% of its customer base.

I’ll admit that all this talk about “feel” didn’t sound that groundbreaking to me. (Duh, running shoes should feel good.) But Lululemon says that, historically, shoes are designed for men’s feet first and then adapted for women. Lululemon flipped this, studying women and their feet first, in what Choe calls “a paradigm shift.” It’s a concept that also guided the design of track star Allyson Felix’s new Saysh shoe line.

Lululemon made lasts—the form from which shoes are made—from scratch, which is also unusual. Some shoe companies use standard lasts or adapt their women’s shoes from existing men’s lasts. Lululemon had committed to researching how women’s feet differ from men’s (narrower heel, wider forefoot, different big toe size, totally different body mechanics). Building its own lasts was the only way for the company to incorporate all the elements they felt the shoe needed, according to Chantelle Murnaghan, Lululemon’s vice president of research and development, Science of Feel.

Lululemon worked from the inside out when designing the shoes, says George Robusti, Lululemon’s vice president of footwear design and an Adidas veteran. The team used information from 3D foot nerve mapping to determine potential areas of sensitivity, heat, and sweat buildup. It informed the actual structure of the shoe in details like seamless inner linings and using mesh that’s stretchy in certain areas versus rigid in others.

“Everything’s been scrutinized to that level across all the shoes,” says Robusti, noting that the upcoming training shoes feature multidirectional traction pads that will provide stability on surfaces like carpeting and wood alike, a nod to at-home COVID-era workouts.

Then, color brings in the emotion. Choe says that a rose metallic shoe in its APL collaboration was the best-selling colorway, which surprised everyone. Robusti describes the colors in the first launch as a pyramid. At the top is neon green, which is seen as an accent throughout the collection. It was inspired by the green flash that’s seen at the horizon right before a sunset.

You can’t talk about sneakers without talking about logos. The Nike swoosh and Adidas’ triple bars are instantly recognizable. So is Lululemon’s logo. There’s an obvious logo on the back heel, not unlike its placement right above the bum of Lululemon pants. There’s also a small one on the tongue, and one embossed on the rubber of the toe and the bottom sole.

I no longer run thanks to a bad knee, but I laced up a pair of Blissfeels for a four-mile power walk and some light jogging through the rolling hills and asphalt of my neighborhood. They felt cushioned, but not ridiculously so. Mostly, I got absorbed in a podcast and stopped noticing the shoes, which I think is the best-case scenario. Afterward, I had no blisters or soreness. Overall, it felt like a serious athletic shoe, not like a fashion-y sneaker.

Lululemon is launching into an environment in which upstarts like On Running and Hoka One One are taking market share away from the big legacy brands. Even with the customer loyalty that Lululemon enjoys, it will need to woo them and convince them that it can measure up to the high sneaker bar that currently exists. The company definitely, ahem, feels it can do that.