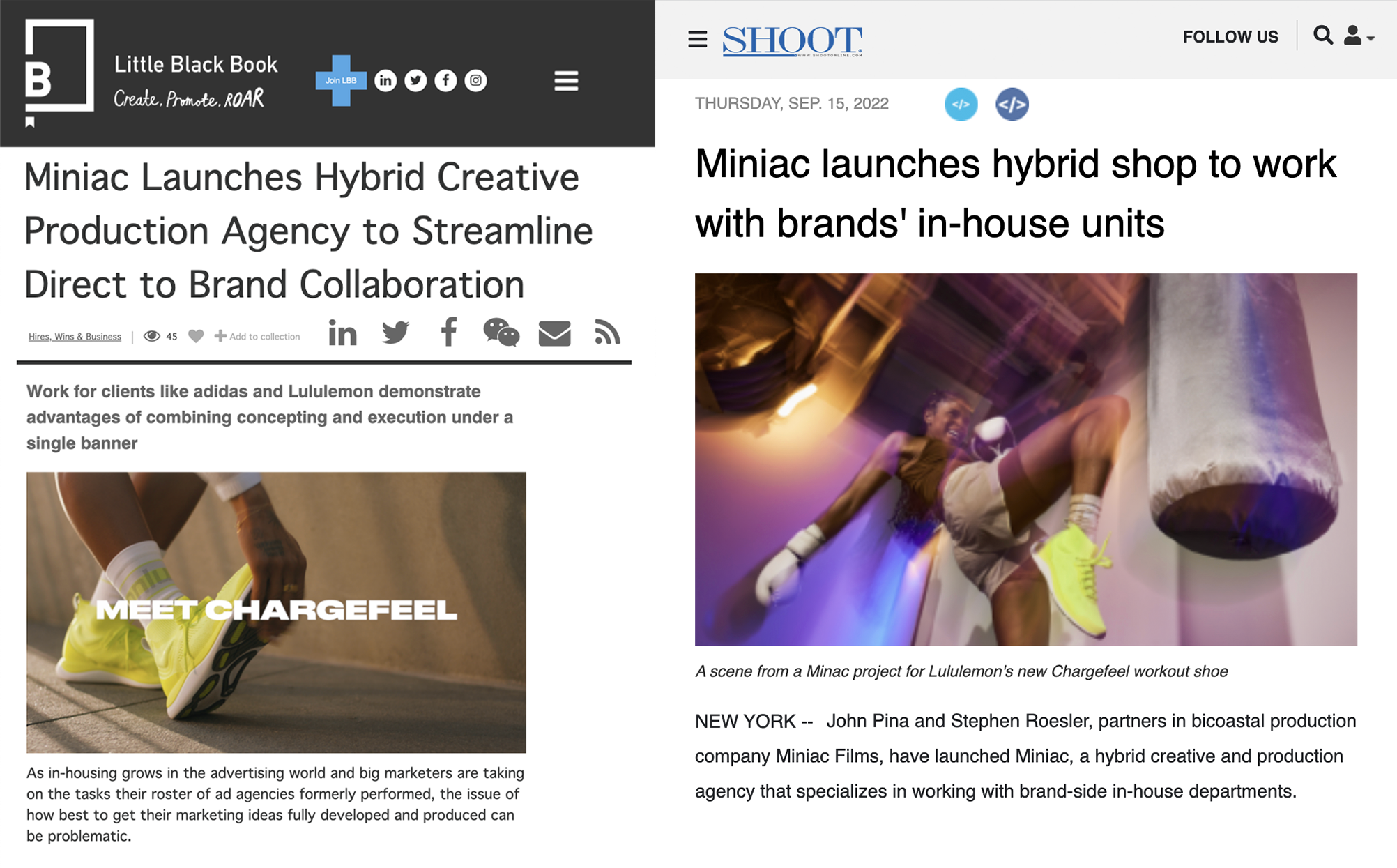 “We looked around at the landscape, and felt it was time for a new model,” said Pina. The new entity was developed with close input from Miniac Film’s brand-side clients at adidas, for which the production company has produced a number of global campaigns and new product launches over the past few years. “This gave us a deep understanding of the nuances of successful in-house partnerships,” Pina continued, “and how to combine an independent hybrid resource such as ours with a brand’s in-house department for maximum effect.”

Roesler added, “We’re set up as a production-led alternative, one in which strategy, creative and production work in lock-step.” Miniac offers brands different levels of engagement, depending on the project at hand and the client’s needs. It can handle production as a standalone deliverable; it can work in a truly hybrid fashion, partnering closely with an internal creative team to transform its concept it into a full campaign, then execute it across platforms; or it can level up to a full 360 approach, taking a marketing objective through creative ideation and concepting all the way through post production.

Already Miniac has put this model to the test, teaming with Lululemon on two product launches: the Blissfeel line of running shoes designed specifically for women, which debuted earlier this year, and the Chargefeel workout shoe, which launched in mid-summer. The Chargefeel work was co-directed by Lucy Sandler and C Prinz, aka Sportscar, the noted hip-hop music video director and choreographer.

Miniac was responsible for channel strategy, creative concepting, film and photography production and postproduction for the Chargefeel launch. While the in-house team at the brand had the initial broad strokes and key points approved, Miniac assembled its own women-led creative team to elevate that idea through concepting, scripts and art direction. Miniac was also tasked with bringing the concept to life via TikTok and Instagram.

Nicole Karalekas, Miniac’s creative director for the Lululemon Chargefeel effort, has worked at such agencies as Anomaly, Droga5, 72andSunny and W+K. She feels the Miniac model has great appeal: “There are advantages that come with a small team--there are no layers to go through for weeks at a time,” she observed. “It forces you to be very decisive and nimble. The creative doesn’t have a chance to be watered down because you make a decision and then you make stuff. And there’s a lot of cost savings that come along with that accelerated timeline.”

“Working this way can also be really efficient, in terms of creating timely, relevant work that feels of the moment and really reflective of what’s happening in culture right now,” she added. “You’re not sitting on mood boards or concept decks for months at a time, no game of telephone tag. So there’s a timeliness that comes with it.’

As Karalekas pointed out, clients aren’t paying for layers of creative staff that aren’t directly involved with the work, either. “It makes the conversation a lot more transparent and the process a little bit cleaner.” And that cost savings, she noted, can be put on the screen, where it matters most.

Her copywriting partner on this campaign, Chelsea Carter, has worked at such shops at The Martin Agency, SS+K and Kirshenbaum Bond + Partners, as well as directly on the brand side. She liked the lack of red tape the process offered: “Nicole and I were able to really work on the ideas, and then move them along to the client, without a lot of the internal layers that exist at agencies. And not having production looped in a lot of times is the bane of many campaigns, so here, having production baked in from the beginning, made the whole process so much smoother.”

That creatives embraced the Miniac approach, said Pina, as they were able to see their ideas spring to life with less filtering than in more structured settings. Clients, too, appreciated the flat structure that brought all the key players into closer proximity.

“We believe our model is going to become increasingly common, as more advertisers realize its inherent value, and more creatives come to appreciate its greater flexibility,” Roesler said. “Miniac demonstrates how, in today’s environment, even small boutiques can partner successfully with global brands and develop new and innovative ways to get things done, outside the traditional agency/client structure.”