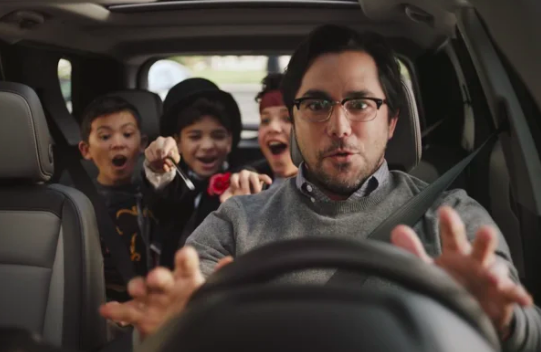 Our car does so much more than transport us from here to there. Our car is our second home. It keeps our family safe and secure, and is the source of many of our cherished memories. We live and experience life in our cars.

This sentiment is the theme of Chevrolet’s new promotional campaign for the launch of their 2018 Equinox. The General Motors team is known for creating safe and reliable cars that are made for the whole family. Still, General Motors has embraced the technological age and their cars feature incredibly intelligence technology that improves the driver’s experience. Chevrolet’s 2018 Equinox is the perfect blend of family friendly comfort and cutting edge technology.

Pina started as a music video director, directing videos for top pop artists like John Legend and Kanye West, but quickly moved into the commercial world. Pina is widely known in the commercial world for his lively yet emotive narratives. Pina frequently works with the German sportswear company, Adidas, which has won him a Canne Silver Lion, for the 2018 film for Futurecraft 4D, and a Clio, for Climachill: Not Made For Normal. Pina’s work greatly carries an urban yet fresh feel that integrated all of Chevrolet’s wants for their launch.

Each film in the campaign told the story of a family, highlighting a special moment between a father and his son or daughter. Pina anchored each film in this narrative, but he also used it to feature the car’s innovative technology. Magic obsessed kids were impressed by their dad’s ability to park the car “hands free” thanks to the Equinox’s automatic parking assistance. A young girl with a broken arm clung to her dad, as he open the truck using the hands-free gesture lift gate to surprise her with a “get well” present. Each story was heartfelt but straightforwardly advertised the vehicles new technology.

Pina brightly lit each film and scored it to folksy tunes to create a wholesome and gentle tone throughout the campaign. His shots of the car were crisp and smooth, as it drove down neighborhood streets. Pina wanted the viewer to know that just because the car is for the whole family, doesn’t mean it can’t look and feel sleek.

With the 2018 Equinox, Chevrolet has enhanced the family experience in the car. They have created a safer car that allows for easier travel with the family by catering to the whole family’s needs. Chevrolet’s 2018 Equinox allows for family to find new roads together.